Last weekend I decided to take the kids to Charolottesville to go apple picking at Carter Mountain.  The drive up was beautiful.  75 degrees and sunny.  When we started driving up the mountain pass, all of the kids dropped their ipods/DSi’s and started oohing and aahing about how pretty it was and asking where the apples were and what were we going to do.  We ended up parking about really far away from the orchards but they provided a shuttle bus (bonus for Matthew!) .  The place was packed!  and we saw a bunch of people who we knew who were finishing up as we were getting there.  We got bags and headed out into the orchards.  They had fugi apples, golden delicious, and jonagold that were ripe.  My favorite pink ladies weren’t ready yet so that was a little disappointing.  And the other kinds were pretty picked over but the kids loved walking up and down and finding some that were low enough for them to pick.  Also, with all of the apples on the ground we got to see (and talk alot about) the bees and why they were there.  We ended the afternoon with a hay ride around the orchards that we had just walked along. 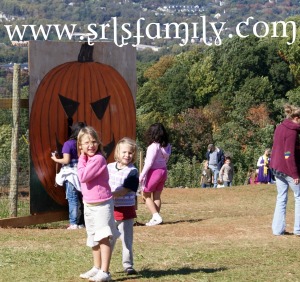