Our schedule these weekends is becoming all baseball – all the time.

The weekend started with Riley’s game on Friday night.  It was a tough loss for the team against the 3rd place team.  Saturday we played the first place team.  Riley had a great game.  He had a double to start off the game!  Later he hit a triple and got on base at least another 2 times.

The coach had asked me if Riley could participate in the Richmond Baseball Challenge on Sunday which was a free team and individual tournament at a local baseball academy.  Since he had played so well, I decided he deserved it.  This was held at the largest indoor baseball field in Virginia.  Who knew…it is right down the street from us.

Riley and 4 other of his teammates participated in 4 challenges in the 8-9 year range.  First was a speed challenge where they ran from 2nd base to home plate in a timed challenge.  Riley was faster thant 3 of the 4 other boys (no flat footed Lavoie running for that boy – thank God for adopted genes!).  Next was something called Around the Horn where the 5 boys stood at the major infield positions and the catcher through the ball to 3rd and then to short and to second and to first and then back to home.  The boys had never practiced this so – well, we didn’t do great.  The 3rd challenge was a throwing challenge.  The boys threw two balls from LC, CF and RC toward a backstop.  They got points for getting the target.  Riley hit it with every throw.  I hadn’t been watching all of the other boys (about 25 total) but as he was leaving, the coach said…”you might want to stay close, Riley did really well and he might win a medal on that one”.

This Baseball Challenge was clearly a promotional thing for this TSI place – they had free food, jumping places out front for the kids and the mascot from our local Baseball team who gave pictures and autographs. 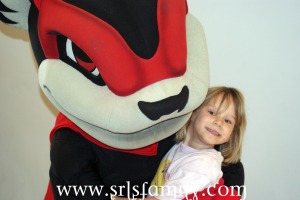 So, since we had about an hour until the Home Run Derby, we went out to the jumping houses.  All of a sudden one of the other Dad’s came up calling for Riley saying that he had won a medal and they were looking for him.  He ran in had this mile wide grin!  They gave him a 1st place medal and took his picture.

It was a long day, but definitely worth it!