Monday I went to DC for a meeting.  I stayed one night and went to a few of the seminars and met with my project coordinator and then drove home.  When I planned to go to the meeting I anticipated coming home mid day and taking the rest of the day off but I had so much work to do that I went into the office to do some paperwork.

Here are some pics of the kids from the last couple of weeks.

First we have Addison at Chuck-E-Cheese’s: 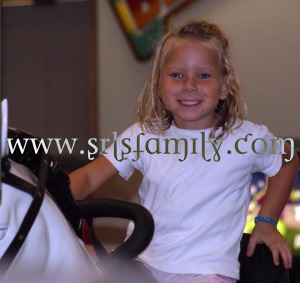 Here’s the big girl riding her 2 wheeler bike.  She has gotten really good and can even get herself started in most cases.

Here is our cousin Nina during the visit at our house. 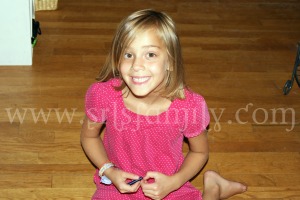 Speaking of bike riding, on Thursday I let Riley convince me to go for a bike ride with all of them.   We started out and rode to the local park about 1 block away.  Riley and Matthew were at the front with me taking up the rear – making sure that Addison would keep going and could keep up (she is slow with the training wheels).  Then we rode a short way on the sidewalk to another neighborhood which has a bunch of cul-de-sacs and unfortunately, as we rode it started thundering so I asked the boys to head home.  Along the way the boys were weaving in and out of the side walk and fighting / bickering amongst themselves about who would be first.  As I was screeching at them to stop, I didn’t notice that Addison had stopped short and as I put on my breaks, I stopped too fast and went flying over the handlebars and landed on my face!   Addison stopped to see if I was okay but the other 3 kept going.  I got a bloody nose and my teeth were sore and the chain on my bike was off so I had to walk it home.

So, I think that there won’t be bike riding for a few weeks.