Waiting to go outside

Today was the annual “Field Day” at both Matthew and Riley’s schools.  I had signed up to help out with Riley before I got a notice of Matthew’s school.

I wish I had known so I could have chosen based on the T-shirt color Riley’s class teacher chose.

I didn’t get to see Matthew’s day but he says he had a GREAT time.  At daycare he had a dragonfly that he was playing with all afternoon.  It was flying around him and landing on his hand.  I wish I had gotten a picture of that!

Here are some pictures of Riley’s day.  His skin tone – which is darkening by the day down here (as is his hair lightening!) – was actually good against the ghastly electric neon yellow! 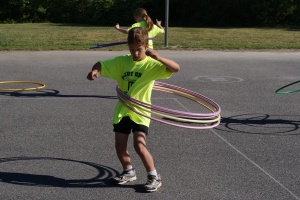 How many hula hoops can I keep on my hips (my manly boy!) 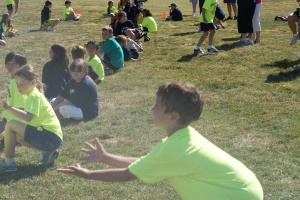 After the day, we had a mother-son day.  I took him to lunch at Dave and Buster’s and we used up some of our tickets and then we hung out at home until it was time to pick up the other kids.

It was a good day!